Impossible mission for the British Paras

The 9th Parachutist Battalion dropped in Normandy on 6 June 1944 under the cover of darkness. Lieutenant-colonel Otway trained his troops for months to take the Merville battery. The parachutists knew every detail of the German defences. On D-day the operation began in a tragic way : many parachutists drowned in the marshes, the wind scattered the men on a wide area and the main part of the heavy equipment was lost. However the Red Devils launched the attack, they conquered the blockhouses of the battery one after the other. At 5:00 am all was finished, the parachutists took a layback position in Le Plain and Le Hauger. In this area the 6th Airborne Division renewed with the Operation Paddle on 17 August. The Belgian Brigade under Colonel Piron captured the strongpoint of le Moulin du Buisson and reached Merville and Franceville, cleared of enemy. In the evening the Belgian stopped in front of Le Hôme still occupied by the German troops. Le Hôme is liberated the next day on 18 August. 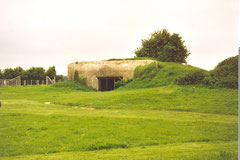 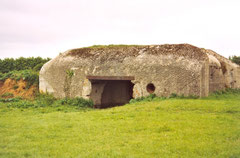 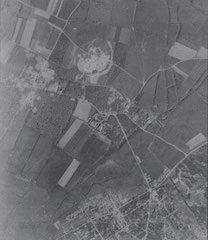 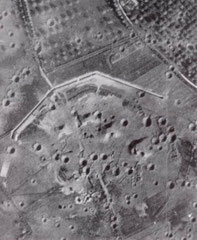 This stele is in memory of the 9th Parachutist battalion, of the Royal Navy and RAF who enabled to capture this battery at 5 o'clock in the morning on 6 June 1944.

A masterstroke operation for the “Winged Horses”

The 5th Parachute Brigade of the 6th British Airborne Division was assigned a special mission in the first hours of the Landing in Normandy. On 6 June 1944, the parachutists had to seize and hold the bridges on the river Orne, and to block the German reinforcements on the battlefield.

In the night of 5 to 6 June 1944 the parachutists of the 2nd Battalion Oxfordshire and Buckinghamshire Light Infantry took on board their Horsa gliders. Around 1:00 am the 150 men under Major Howard landed aboard their gliders right in the objective, and captured the bridges. The German soldiers guarding the Benouville Bridge were quickly neutralized. The Commandos were joined by the parachutists of the 7th Brigade, they repelled several German counter-attacks. in the beginning of the afternoon, Lord Lovat’s Brigade reinforced the position. The Germans were taken by surprise, the bridges on the river Orne and the canal of Caen were seized untouched. The Operation Coup de main party was a complete success.

This museum opened in 2000, it is dedicated to the British Airborne troops. Walking round you can see a map in relief, uniforms, weapons, materiel and the famous Bill Millin bagpipe.

Outside the Memorial you discover the original Pegasus bridge that explain the highest importance of the parachutists's mission.

The Gondree Cafe had been used as an aid post, and the cafe owner, Monsieur Gondree, dug up his supply of champagne from the garden and gladly shared it with his liberators.

Today the cafe has become the first stop for any visitor to this part of the battlefield; it is still owned by the Gondree family, and still a cafe; but inside is also a living museum. The original Pegasus Bridge was replaced in the 1990s, but is now on display in the nearby Pegasus Memorial Museum.

In 1944 Ouistreham was a town situated just behind Riva Bella on the Norman coast. Close to the mouth of the River Orne and the Caen Canal the area was strongly defended. The 177 Frenchmen of the 1st Battalion of Fusiliers Marines Commandos landed there on 6 June 1944. The French under Commandant Kieffer were integrated to the N°4 British Commando. They were granted the honur to set foot on Normandy soil in the first wave. The Commandos left about forty casualties on the beach and moved inland. Commandant Kieffer was wounded but went on with his troops. Troop 1 suffered losses in front of the casino strongpoint. They obtained support of a tank of the 13/18th Hussars of the 27th Armored Brigade. The German blockhouse was neutralized Ouistreham was liberated at the end of the morning.

This museum is located in a 17 meter height bunker, it was a  casemate for firing control firing. It revives the atmosphere of the fightings through reconstitution of rooms with material and uniform suited dummies. On last of the five floor, one can look at the landscape through a German rangefinder, and some heavy material is exposed outside such an 88 Flak gun.

The young SS Grenadiers die in the ruins of the city

After the Operation Cobra the German frontline is breakthrough in Avranches at the end of July, the Allied forces emerge finally from the Norman hedgerow, and fan out in Brittany and in Anjou. A German counter-attack fails in Mortain on 7 August. On 12 August, two armored divisions reach Argentan, the 5th American Armored Division under General Oliver, and the 2nd French Armoured Division commanded by General Leclerc. In the north, the Canadians are only ten kilometers from Falaise. Between Argentan and Falaise stands a 23 kilometers wide gap, a pocket takes shape clearly. On 16 August, the 2nd Canadian Infantry Division is in the vicinity of Falaise, the 6th Brigade assaults the city, where a SS Kampfgruppe is entrenched. The Canadians progression is slow, the Germans defend to ground with machine-guns and anti-tanks. In the evening, the young soldiers of the 12th SS-Panzerdivision Hitlerjugend are still holding the Saint-Jean school building, they are beleaguered by the Fusiliers Mont-Royal. On 17 August at dawn, the Germans die in the ruins, when the Canadians launch the last attack.

This Museum is located in an old cheese dairy, at the foot of the medieval castle, and reports the Falaise pocket battle. Weapons, uniforms and equipments are exposed and revive the fighting of August 1944. An armored vehicle Sexton and a 88 mm German anti-tank gun are exposed outside. The red dot markes the site of the museum today. 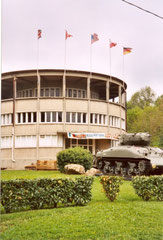 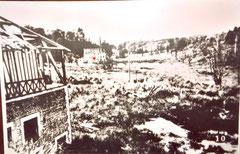 The town of Falaise was the birthplace of William the Conqueror, first of the Norman kings of England. The castle (12th–13th century), which overlooks the town from a high crag, was formerly the seat of the Dukes of Normandy. It can be seen from the Museum.

The castle suffered due to bombardment during WW2 in the battle for the Falasie pocket in 1944, but the three keeps were unscathed.