The winter of 1944-45 settled on the Vosges as the coldest in recent memories. Eisenhower's order to the Seventh Army in December 1944 was to straighten its lines around Strasbourg and eliminate the 35 by 40 mile German bridgehead centered around Colmar which was a result of the French Army's failure to push the Germans back to the Rhine River in their sector.

Le Bonhomme was the site of some great photos taken on December 12, 1944 of a group of M8 Howitzer of the CC4 (Combat Command) of the 5th Armor Division (Division Blindée) attached to the 3rd DIA (Division d’Infanterie Algérienne).

The breakthrough at Brouvelieures on October 20 combined the three VI Corps infantry divisions: the Third, the 36th and the 45th. The enemy had previously stabilized his positions on the high ground west of Brouvelieures, where the 45th Infantry Division, strung out as far as Rambervillers on the north, had been unable to concentrate enough force to penetrate the enemy line.

The attack through Brouvelieures and Vervezelle began October 20, 1944 at around noon, the 7th on the right heading due east for Vervezelle, the 15th on the left swinging, to the northeast toward Brouvelieures. The attack was opposed by the German 16th Infantry Division.

Brouvelieures was under deadly artillery assault from high ground positions to the west and this German artillery took a toll on Brouvelieures.

It was near here, that the highly-decorated 442nd Japanese-American Regimental Combat Team, newly attached to the 36th Division, fought for and liberated Bruyeres and performed its rescue of the 36th Division's "Lost Battalion".

As the action passed, the 9th Field Artillery entrenched their 105-mm howitzers near Brouvelieures. Artillery units in Brouvelieures attached to the Third Division supported the infantry advance through the Mortagne Forest and Rouges Aux. VI Corps three divisions had been continually engaged since the Riviera landings and were now facing winter conditions and increasingly rugged terrain.

The 3d Battalion of the 15th Infantry, commanded by Maj. Russell Comrie, helped the campaign tremendously by seizing a bridge over the Mortagne River just north of Brouvelieures before the enemy could demolish it. The regiment crossed as rapidly as possible at this point, and began an attack to the east along the ridge on which the town of Mortagne was situated. The 15th met many strong detachments of enemy trying to escape over the few roads leading away from this ridge-top to the east and northeast, and fought a series of spirited engagements during this advance.

The Epinal American Cemetery and Memorial in France, is sited on a plateau 100 feet above the Moselle River in the foothills of the Vosges Mountains and contains the graves of 5,255 US military dead. It is one of 14 permanent World War II American military cemeteries erected on foreign soil by the American Battle Monuments Commission. The site was liberated on 21 September 1944 by the U.S. 45th Infantry Division and a temporary military burial ground was established there fifteen days later by the 46th Quartermaster Graves Registration Company of the U.S. Seventh Army. Subsequently, the burial ground was selected to be a permanent cemetery site. Free use of the Epinal site as a permanent American military cemetery was granted by the French government in perpetuity without charge or taxation.

Most of the 5,255 American soldiers buried in the Epinal American Cemetery lost their lives in the fighting across central France, the Rhone Valley, the Vosges Mountains, the Rhine Valley and Germany they represent 42% of the original burials in the region. The cemetery became the repository for the fatalities in the bitter fighting through the Heasbourg Gap during the winter of 1944-45. The cemetery is also the final resting place for four Medal of Honor recipients. 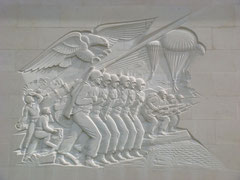 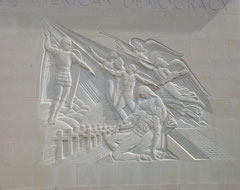 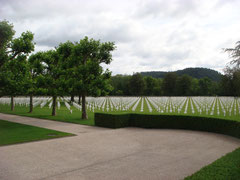 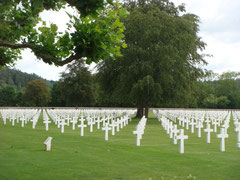 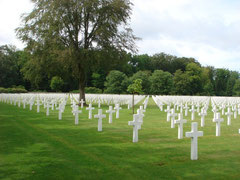 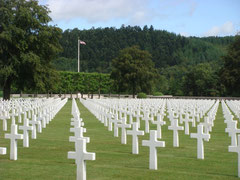 Earned The Medal of Honor During World War II For heroism October 09, 1944 at La Forge, France

First Lieutenant Kandle, while leading a reconnaissance patrol into enemy territory, engaged in a duel at pointblank range with a German field officer and killed him. Having already taken five enemy prisoners that morning, he led a skeleton platoon of 16 men, reinforced with a light machinegun squad, through fog and over precipitous mountain terrain to fall on the rear of a German quarry stronghold which had checked the advance of an infantry battalion for two days. Rushing forward, several yards ahead of his assault elements, First Lieutenant Kandle fought his way into the heart of the enemy strongpoint, and, by his boldness and audacity, forced the Germans to surrender. Harassed by machinegun fire from a position which he had bypassed in the dense fog, he moved to within 15 yards of the enemy, killed a German machinegunner with accurate rifle fire and led his men in the destruction of another machinegun crew and its rifle security elements. Finally, he led his small force against a fortified house held by two German officers and 30 enlisted men. After establishing a base of fire, he rushed forward alone through an open clearing in full view of the enemy, smashed through a barricaded door, and forced all 32 Germans to surrender.

Earned The Medal of Honor During World War II For heroism December 03, 1944 at St. Hippolyte, France

Sergeant Weicht commanded an assault squad against the important Alsatian town of St. Hippolyte. He aggressively led his men down a winding street, clearing the houses of opposition. Rounding a bend, the group was brought under the fire of two machineguns in the door and window of a house 100 yards distant. While his men took cover, Sergeant Weicht moved rapidly to a high rock wall and, fearlessly exposing himself to the enemy, fired two clips of ammunition from his rifle. His fire proving ineffective, he entered a house opposite the enemy and, firing from a window, killed the two hostile gunners. The advance was later halted when two 20-mm guns opened fire on the company. An artillery observer ordered friendly troops to evacuate and then directed artillery fire upon the gun positions. Sergeant Weicht remained in the shelled area and continued to fire on the hostile weapons. When the barrage lifted and the enemy soldiers attempted to remove their gun, he killed two crewmembers and forced the others to flee. He continued forward until he spotted a road block 125 yards away. Moving to the second floor of a nearby house and firing from a window, he killed three and wounded several of the enemy until he was killed by a direct hit from an antitank gun.

Corporal Kelly's unit was pinned down by heavy enemy machinegun fire emanating from a deeply entrenched strongpoint on the slope leading up to Fort du Roule at Cherbourg, France. Corporal Kelly volunteered to attempt to neutralize the strongpoint. Arming himself with a pole charge about ten feet long and with 15 pounds of explosive affixed, he climbed the slope under a withering blast of machinegun fire and placed the charge at the strongpoint's base. The subsequent blast was ineffective, and again, alone and unhesitatingly, he braved the slope to repeat the operation. This second blast blew off the ends of the enemy guns. Corporal Kelly then climbed the slope a third time to place a pole charge at the strongpoint's rear entrance. When this had been blown open he hurled hand grenades inside the position, forcing survivors of the enemy guncrews to come out and surrender.

He served in the 442nd Anti-Tank Co. of the 442nd Regimental Combat Team

Teruo was born June 12, 1925. In 1942, his family and Teruo transferred to the Relocation Camp at Heart Mountain (Park) Wyoming. In 1943, a year later, he volunteered for the US Army.
He served in the 442nd Anti-Tank Co. of the 442nd Regimental Combat Team. On November 6, 1944, Pfc. Teruo Fujioka was killed in action by shrapnel, in the Vosges. He was posthumously awarded the Purple Heart.

His final resting place is the Epinal American Cenetery and Memorial, Lorraine Region, France. Plot B-2-50

I would like to thank the following persons and friends for helping in my research:

Some of the 1944 images used for the “Then and Now” comparison photos on this site are part of a collection archived by William J. Toomey of Everett, Massachusetts while serving with the Third Signal Company of the U.S. Third Division during WWII. Bill was a member of a five-man crew of photographers along with William Heller, John Cole, Robert Seesock and Howard Nickelson. The photographs from this unit form a major part of the visual history of the Third Division in WWII.

Other photos of 1944/1945 taken from www.ecpad.fr the French Department of Defense.