The Guns of Saint Marcouf (German Costal-Batteries Crisbecq and Azeville)

The Battery of Crisbecq was built in 1942 by the Todt organization to be the main strongpoint of the Cotentin east coast, but only two casemates were completed out of four on D-Day. It was officially named as the 3rd Battery of the Heeres-Küsten-Artillerie-Regiments 1261. By 1944 there were : 2 x 155mm guns, 3 x 210mm Skoda Guns, 6 x75mm AA guns and several smaller automatic weapons. Two big 210mm Skoda Guns in casemates as well as a 150mm Gun in a open field emplacement dominated the Vire-Bay in front of Carentan. This position was bombed every evening with 800 tons of Bombs, starting from April 19 to June 5, 1944. In the night to the 6 of June, another 600 tons of bombs have been dropped. However, the battery was able to oppose to the Landing.

Under the command of Oberleutnant Walter Ohmsen, this Battery performed heavy resistance. Ohmsen even gave order to the sister Battery Azville to shell his own position in order to get rid of the US attackers. Oberleutnant Omhsen, was distinguished for his action with the Knights Cross. On 7 June, the 210 mm guns sank a destroyer; at the end of the day the 4th Infantry Division was always stopped in front of the blockhouses. The following day, three American battle-ships, together rammed the position and ended up reducing it to silence. In the night of 11-12 June 1944, out of the 406 men, only 78 evacuated the battery. 21 men, severely wounded had to stay behind together with a medic. Those be-came POW after a recon patrol of the 39th Infantry found them around 08.20 A.M on June 12, 1944.

Photos below left to right:

Both casemates have been blown up by the Americans after the fighting because those guns made big problems. Especially the 155mm gun in the open position sunk many landing crafts. On the occasion of the 60th anniversary of the D-Day landing, all bunkers have been dug up. Today, there is a museum. This battery was one of the biggest in the whole Atlantic Wall.

Situated 4 kilometers in the hinterland, on the east coast of the Cotentin Peninsula in Normandy, the German coastal battery - Stützpunkt 133 - had a 170 men garrison, and four blockhouses with 105 mm heavy guns. Officially named 2nd  Battery of the Heeres-Küsten-Artillerie-Regiments 1261 was a “blind Battery” with no sight to the open sea. The observer bunker was on the site of the Crisbecq Battery. From there, a telephone cable connected the Azeville Battery with its Observation point. 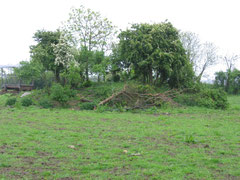 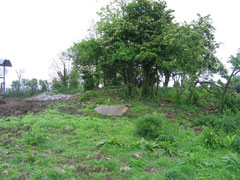 Remains of the Azeville Observation Bunker Type R120a on the site of the Crisbecq Battery. The bunker had a armored turret.

Photos below Azeville Battery in 2006. Today the bunkers have the original camo painting.

On 6 June 1944, it was unsuccessful in repulsing the Allied Forces landing on Utah Beach; indeed, the guns were at their maximal range. In the evening of 7 June, the 4th American Infantry Division was pinned down by Azeville and Crisbecq-Saint-Marcouf defenses. On 8 June, the assaults of the 22nd Regimental Combat Team broke against battery of Azeville. In the meantime, at the request of commander Ohmsen, Azeville battery opened fire on the Crisbecq blockhouses, to drive back American infantry penetrations. However, Azeville was encircled and shelled. Then on June 9, 1944, one blockhouse was attacked with a flame thrower. After the flame thrower attack, which blew the ammunition of the one casemate, the whole garrison surrendered.

This was an important target for bombers prior to D-Day and the 101st Airborne who landed close by and assaulted the gun site. WN108 is set in fields next to a farm which was probably commandeered as extra accommodation. It was manned by soldiers of the 1st Battery of the Heeres-Küsten-Artillerie-Regiment 1261 and had originally four 122mm Russian K390/2 guns with a range of 20 Km

This is the older and larger site had six open emplacements for 155 mm howitzers captured from the French and made around 1919. This previously forgotten battery has been uncovered and it is about to re-write the story of D-Day. Military enthusiast Gary Sterne came across the buried 40 acre site a few years ago whilst studying a wartime officer's map of the area marked 'Area of High Resistance'. "Not knowing where I was going or what I was looking for, I continued walking across the fields until to my amazement I found I was standing on concrete. I followed the concrete to the edge of the tree line and discovered a bunker entrance... then a tunnel, an office, store rooms, headquarters buildings, radio rooms, bunkers … and most importantly mounts for 155mm cannons," he recalled. Thus began a four year project to buy the land from its various owners, and to uncover the largely untouched bunkers and tunnels.

Maisy was guarded by 12 x 88mm anti-aircraft canons (8 in front and 4 in the fields behind). As well as its usual personnel who had manned it since it was built in 1942, it was guarded by infantry from the 352nd & 716th Infantry Divisions and a flak battalion arrived on the 3rd of June and was ordered to defend it. This flak battalion was commanded by Colonel Kistowski and in his original interviews with Longest Day writer Cornelius Ryan he provides graphic details about the Allied planes flying over Maisy on D-day and how the Germans kept up the pressure to repel the invasion by shooting them down. He reported that they captured 19 US paratroopers at Maisy on D-day alone.

On D-Day and for two days afterwards, the Maisy Battery fired on American soldiers landing on Omaha Beach Sector CHARLEY. However, only troops of C, D, E and F Company of 2nd Ranger Infantry Battalion landed.

After three years of research Gary believes that he may have the answer: the huge casemated guns at Pointe du Hoc were an elaborate bluff – the gun barrels pointing from the concrete bunkers were telegraph poles - a 'ruse de guerre' by Rommel to distract the Allies who diverted men and bombing raids to destroying it.

On the morning of the 9th of June 1944 Maisy Battery was attacked by units of the US 2nd and 5th Rangers, soldiers from the 116 Regiment of the 29th Div. (Maryland, Virgina National Guard) and 83rd Chemical Weapons Battalion (Heavy Mortars) and was supported by a barrage from a US field gun battery. In another of Ryans interviews with Staff Sgt. Donald Chance of A company 5th Rangers, Chance wrote that “we were the lead company in the behind the lines action to attack the complex at Maisy”. The firefight lasted all morning until the Germans eventually surrendered. The scars of the battle can be seen so vividly at the site today - in the tunnel walls and building fronts and are a testament to the ferrocity of the encounter.

When it was eventually captured by the Rangers the site was well stocked with food and over 180 tons of ammunition and could have continued to fire at Omaha Beach.

If all is true what is said about this new found battery, than the assault to Pointe du Hoc is highly questionable. Could it really be that the Ranger attacked the wrong strongpoint at D-Day? There are Rangers, after Mr Gary Stern who clearly confirmed, that they assaulted the Maisy 2 battery and it took them longer than expected to take them.

Situated west of Arromanches-les-Bains in Normandy, Longues-sur-Mer overlooked the ocean from the top of a 65 meters height cliff, a perfect position where the Germans had installed a four 150 mm guns. On 6 June 1944, at 5:30 am several allied battle ships opened up on the battery. When the Allied Armada was on sight, the German guns shot back. The HMS Ajax concentrated its fire on the German battery at a range of 1.000 meters. The battery stopped operating for a short time, but fire started to shell the Landing ships until 5 pm. The Longues Battery surrendered to British troops the next day with 184 men. 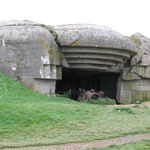 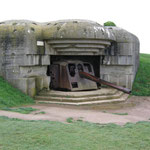 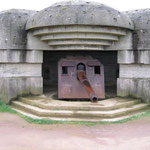 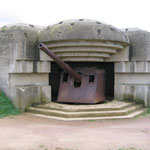 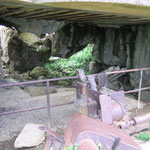 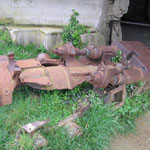 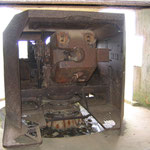 A fire control casemate, hardly completed on 6 June 1944, was installed at the cliff edge. This observation point was also seen in the movie “The Longest Day”.

Each Mayor in the battle torn parts of France after the war was allowed by the government to remove any metal, equipment, food, materials, etc. and sell/use the items for the good of his people. This mayor of Longues decided to leave the guns intact as a monument to hostilities