The battle for Normandy became a series of brutal small actions in which attacks were met by counterattacks and real estate changed hands on a daily basis. In July 1944 one such action, at Saint-Germain-sur-Sèves, a small island in a stretch of marshy area, pitted GIs of the U.S. 90th Infantry Division, known as the “Tough Hombres” against counterattacking Germans of the 6th Fallschirmjaeger  Regiment under Major Friedrich August Freiherr von der Heydte. The hard-fought battle would result in the capture of more than 200 U.S. soldiers, 400 wounded and an unusual truce between the Germans and Americans to evacuate wounded soldiers.

St. Germain-sur-Sèves lay atop a low ‘island’ surrounded by terrain that made it relatively inaccessible. On the north it was bounded by the Sèves River, and on the other side it was bordered by swampland and creeks. In July 1944 it had become even more isolated than usual from the surrounding territory because of heavy rains that had fallen during the previous month. For the Americans, this problematic piece of real estate would become known as Seves Island.

Here, Sergeant Alexander Uhlig’s counterattack with his 16 men was one of the last successful actions fought by the Germans in Normandy. He made up to 200 US POW. On October 24, 1944, Uhlig was awarded the Knight’s Cross for his daring mission at St. Germain-sur-Sèves. He was later captured by members of the 90th Infantry’s 357th Regiment and spent the rest of the war in a prison camp.

At about 1500, von der Heydte received a report that several Americans were trying to help the wounded men lying in the swampy grasslands between the island and the Seves. After a three-hour truce agreed by von der Heydte to get the wounded, the fighting resumed. Never again did the 90th Infantry Division suffer the indignity of surrendering so many men and officers–a total of 265–to the Germans. In fact, the division gave much better than it received, ending the war with many battle honors and a reputation as being among the best American divisions.

The 90th Division’s failure to take Seves Island on July 23 was, after all, a minor setback. At the end of July 27, the Americans had occupied St. Germain-sur-Sèves–by then abandoned by the German paratroopers–and moved on to liberate Periers. Major General Eugene Landrum was relieved of command shortly after the Seves debacle and replaced by Brig. Gen. Raymond S. McLain. At that point the 90th’s fortunes began to change. McLain, described as an ‘exceptionally able officer’ by Lt. Gen. Omar Bradley, commander of the U.S. First Army, led the 90th as it participated in Operation Cobra. In the end, according to General Bradley, the 90th Infantry Division ‘became one of the most outstanding in the European Theater. 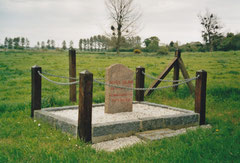 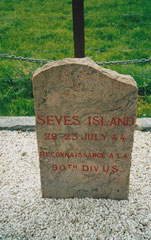 The Monument in memory of soldiers of the 90th American Infantry division killed in the fighting for the liberation of Saint-Germain-sur-Sèves on 22 July 1944. The location is just near the ford. There was a reunion some years ago but there are only a few people who know this place. Farmers found a German Fallschirmjaeger in 2004 while farmworking. I have bbeen told that there are still several more to find in the bocage.

Along this street was the German defense trench line

On July 22, 1944, soldiers of the US 90. Infantry Division came over the ridge in front. They made the mistake to stop and not to go further, instead they dig themselves in just about 100 meters in front of the Fallschimrjaegers defense trench.

This house is called La maison Neuve and is just outside Periers. This was the headquarter of FJR 6, commanded by Mayor von der Heydte during the fights of Seves Island. The house still remains the same as in 1944. Even the table and the chair in the living room is the same that von der Heydte used. Feldwebel Alex Uhlig took his POW to this place after he got them in Seves. 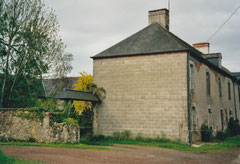 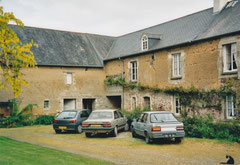 The small fields and numerous tracks benefited German antitank guns against US armor. Artillery and mortar fire from St. Lô fell on the Americans lines. Roadblocks, minefields and the liberal use of barbed wire further frustrated the Americans. July 11, 1944 dawned cloudy with haze. US Air support for the day was canceled. At 6. A.M 2 battalions of the 38th and the 23rd Rgt advanced having to fight for the ground voluntarily vacated few hours before. Within an hour the first wave of 6 American tanks had been knocked out or had to withdraw. The rolling artillery barrage placed 45 tons of explosive on hill 192's slope between the east-west road and the pinnacle.

The hamlet of Cloville 2.5 Km west of St. Georges-d'Elle on the east-west road was in the line of advance for Easy Comp. of the 38th Rgt. A draw runs north 400 meters from Cloville to a ridge, a German strongpoint, manned by half a company that had survived the bombardment. This place became nicknamed "THE KRAUT CORNER". The defenders with clear lines of fire and pre-registered mortar impeded the US advance. Under strong small arms covering fire a 10-man platoon broke through the defenses from the east. Resistance stopped after a fierce fire fight. Only 15 German prisoners were taken. Three die hard defenders would not give up. A tank dozer buried them alive under dirt scraped from their own defense berms. 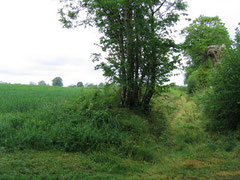 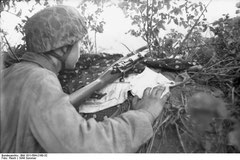 June 16, 1944 the 2nd Inf Div attacked with its 3 regiments (9th, 23rd and 38th) on 8 Km front. The hedgerow fighting was slow and costly. By midnight the road running west from St. Georges d'Elle crossroads to St. Andre-de L'Epine for 2 Km had become no man's land.

300 meters south of St. Georges-d’Elle the gully had been named „Purple Heart Draw“ by the survivors. 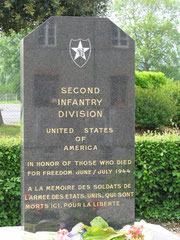 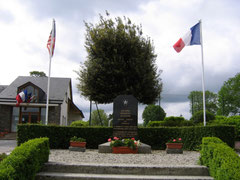 Stele in memory of soldiers of the 2nd American Infantry Division killed in the fighting for the liberation of Saint-Georges-d'Elle.

The tenacious defenders, among them the 3rd Battalion, Fallschirmjaeger Rgt 9 of the German 3rd Fallschirm Division, held their line through June 1944.

The 2nd US Inf Div took 1'200 casualties and gained little. Ste. Georges d'Elle changed hands several times before the 23rg Rgt. consolidated its position in the buildings on the village's south side.

The northern slope o f Hill 192 descending to the St. Georges d'Elle - St. Andre-de-l'Epine road was dotted with German resistance nests that defended each other with crisscrossed lines of fire.

This is the view over the former battlefield to the Iron Mike hill. On the right side is the only passageway: a narrow, elevated road surrounded by floodwater.

The photos below show the Cauquigny church. My friend, Mark Patterson has another Airborne Stained Glass window project.
The window will be dedicated to the men of the 82nd Airborne Division and will be placed in the church at Cauquigny. This is the church at the end of the La Fière Causeway that was heavily damaged during the battle there.

This is the location where Col. Timmes and his men from the 82nd Airborne 507th fought and held off superior German forces.

This is the spot where Lt. Malcolm Brannen and men of the 82nd Airborne 508th, ambushed and killed German General Wilhelm Falley.